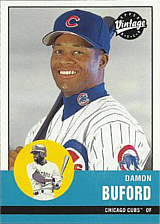 Only in the penultimate season of his big league career did Damon Buford finally play regularly, starting in 130 games in the Chicago Cubs outfield in 2000 while batting .251/.324/.390 with 15 home runs. The son of Don Buford and brother of Don Buford, Jr., Damon had seen time with the Baltimore Orioles, Texas Rangers, Boston Red Sox and the New York Mets before receiving the chance thanks to a deal out of Boston in return for utility infielder Manny Alexander in December 1999. His line was not particularly impressive given the offensive explosion going on in baseball at the time, and Buford only played 35 more games in 2001 before disappearing one game shy of 700 for his career.