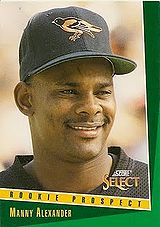 A part-time infielder for various teams, Manny Alexander's first big league job was as the low-demand backup to Cal Ripken with the Baltimore Orioles. His career was derailed in 2000 when illegal steroids were found in his car while playing for the Boston Red Sox. He appeared briefly in 2004 with the Texas Rangers. He had a good year in 2005 with the minor league Oklahoma Redhawks and was a September call-up for the San Diego Padres. The following season, his contract was purchased from the AAA Portland Beavers of the Pacific Coast League on August 20, 2006 to serve as a shortstop in the absence of the injured Khalil Greene. While in the majors, Manny primarily wore number 6.