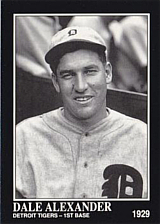 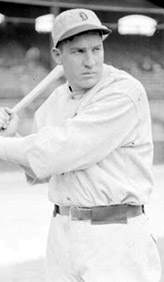 First baseman Dale Alexander had a very brief but successful big league career, winning one batting title and hitting .331 over the course of five seasons.

Alexander made his pro debut in 1924 and hit at least .300 in five minor league seasons. After putting up a hefty .380 average with the Toronto Maple Leafs in 1928 to win the International League batting crown, he joined the Detroit Tigers in 1929. He hit .343 with 25 home runs and 137 RBI as a rookie (his teammate Harry Heilmann hit .344) and batted at least .325 in his first four big league seasons.

Alexander began the 1932 season slowly, hitting .250 in 23 games with the Tigers before being traded to the Boston Red Sox in June. His bat heated up with the Red Sox, and he won the American League batting title with a .367 mark although he had fewer than 400 at bats. On May 30th of the following year, he suffered a twisted knee in a game against the Philadelphia Athletics. During treatment for the injury, his leg became infected with gangrene and he nearly lost it. He returned to the Red Sox that year but after that season, his major league career was over. Alexander wore number 4 with the Tigers and 15 with the Red Sox.

After his big league days, Dale played several more years in the minors. In a June 14th, 1935 contest, while a member of the Kansas City Blues, he hit four homers against the Minneapolis Millers at Nicollet Park. He began his managerial career in 1939 with the Sanford Lookouts and led the club to the Florida State League title in addition to hitting .345 for them. He later was a scout for the New York/San Francisco Giants (1951-1963) and Milwaukee Braves (1964). In 2008, nearly 30 years after his passing, he was elected to the International League Hall of Fame.