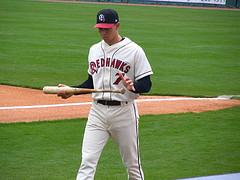 Cody Ransom appeared in 114 games for the San Francisco Giants over a four-year period, with his most regular work coming in 2004 when he was used in 78 games, almost exclusively as a substitute. He returned to the minor leagues for several seasons after that, then resurfaced with the Houston Astros in 2007.

Ransom was used as a utility player by the New York Yankees in 2008, getting the first playing time of his major league career as a first baseman that year - he had originally come up as a shortstop. On September 21, he recorded the last putout in the history of Yankee Stadium, fielding a ground ball from Brian Roberts of the Baltimore Orioles at first base; he had come into the game as a defensive substitute for Jason Giambi in the 8th inning. He hit surprisingly well that year, posting a batting average of .302 and a slugging percentage of .651 in 33 games. Largely as a result of that unexpected good performance, Ransom was chosen to take over at third base for Alex Rodriguez when the superstar was sidelined by a hip injury at the beginning of the 2009 season.

In 2014, he played for the Seibu Lions. On Opening Day, he hit 7th and played third base. He struck out his first two times up against Takahiro Norimoto, then grounded out before singling in the 9th. His first home run in Nippon Pro Baseball came on April 1 when he took Syohei Yoshihara deep.

After retiring as a player, Ransom founded the Arizona National Baseball Academy (originally called the Cody Ransom Baseball Academy) in 2016 to train youth baseball players. He also worked as an assistant varsity coach at Perry High School from 2018-2020 with a focus upon infield instruction and strength training.

In 2020 the Arizona Diamondbacks hired Ransom to coach the AZL Diamondbacks before COVID-19 caused the minor league season to be cancelled. He was a coach for the ACL Diamondbacks in 2021 and Visalia Rawhide in 2022.

Cody's grandfather, Roy Ransom, was an infielder signed to play in the Yankees farm system in 1946. It is not clear whether he ever saw any regular season action in the minors. Cody has been quoted as stating that "He made it to Double A and his last season he hit .298 as a second baseman."