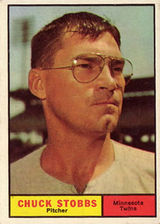 Stobbs was given $50,000 bonus upon signing with the Boston Red Sox before the 1947 season and made his major league debut on September 15th of that year against the Chicago White Sox at Fenway Park, becoming the youngest man in the majors at the time. After five years with Boston, he was traded to the White Sox following the 1951 season. After one year there, he was sent to the Washington Senators.

While with the Senators, Stobbs is probably best remembered for serving up one of the most famous gopher balls in history. On April 17, 1953, Mickey Mantle drove a Stobbs delivery completely out of Washington's Griffith Stadium. Arthur "Red" Patterson of the Yankees' front office staff retrieved the ball and estimated that it came to rest 565 feet from home plate. Patterson's estimate wasn't particularly scientific, but Mantle's blast is still remembered as possibly the longest home run ever.

With Washington in 1956, Stobbs was credited with throwing the longest wild pitch in baseball history, reportedly traveling into the 17th row of the stands. The next year, he went 8-20, losing his league leading 20th game on the season's final day.

After spending part of a year with the St. Louis Cardinals, Stobbs returned to the Senators and followed the team to Minnesota, playing his final big league season with the Minnesota Twins in 1961. His two best overall seasons were with Washington in 1956 (15 wins) and 1960 (12 wins). Stobbs won over 100 games in his major league career.