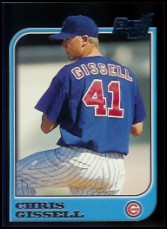 In 2005 he again had a decent ERA, 3.54, with the Memphis Redbirds in the St. Louis Cardinals organization.

Gissell joined the Uni-President Lions of Taiwan. He debuted on March 29th, fanning 8 and allowing one unearned run in six innings but losing a pitching duel to Yu-Cheng Liao. He came back to make a couple of starts for Sacramento at the end of the year.