Note: This page is for 1910s pitcher George Johnson; for others with a similar name, click here. 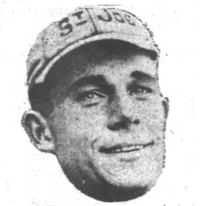 George Howard Johnson was a pitcher for the Cincinnati Reds and the Kansas City Packers from 1913 to 1915. Outside of that period, he spent time in the Western League from 1908 to 1912, and in the Pacific Coast League from 1916 through 1918.

Johnson pitched one game for the Cincinnati Reds in 1914 before jumping to the 1914 Kansas City Packers in the ongoing battle between the Federal League and Organized Baseball. He was the starting pitcher for the Packers against the Chicago Whales in the very first game played at Weeghman Park (later known as Wrigley Field) on April 23, 1914. At the close of the second inning, however, he was served with an injunction by his former club. The "Johnson Case" became one of many legal battles between the Feds and O.B. Missing half the season before the injunction was lifted, Johnson pitched for the Packers for both seasons of the Feds' existence.

Before his baseball career, Johnson was a student at two Indian Schools, Haskell (in Lawrence, KS) and Carlisle (in Carlisle, PA). He ran away from each school, and there is no record of him having played for Carlisle's baseball team. A member of the Ho-Chunk nation (reportedly one-quarter Ho-Chunk with an Irish father), he played for the barnstorming Nebraska Indians before his professional career.

As were nearly all Native Americans of his day, Johnson acquired the nickname "Chief". While he never made a public statement in complaint, he was known by teammates to refuse to respond when addressed that way. When asked, he gave his real name as George Howard Murphy, saying that he was raised by a family named Johnson after his father's death. He was usually known to teammates as either "Johnny" or "Big Murph".

Johnson started his professional pitching career in the Western League, compiling a 90-74 log for three different teams from 1908 to 1912. He went 14-16 for the seventh-place Reds in 1913. He had a 9-10 record for the Packers in 1914 and 17-17 in 1915, finishing his major league career with a 40-43 mark. Johnson constantly battled both alcohol and his weight, and was suspended on more than one occasion by Packers manager George Stovall. After the demise of the Federal League, Johnson pitched from 1916 through 1918 for Vernon and San Francisco of the Pacific Coast League, compiling a 35-43 record in league play. In November 1916, he was part of an All-Star team from the PCL that traveled to Hawaii for a series of games. In one game, Johnson shut out the Twenty-Fifth Infantry Wreckers, besting Hall of Fame pitcher Wilber Rogan 3-0.

After his professional career, he occasionally barnstormed around the Midwest, and also ran medicine shows, in which he sold herbal "Native" medicines (as opposed to the more common "snake-oil" salesmen). Johnson had a reputation in his pro baseball days of being an active practitioner of Native medicines.

On June 11, 1922, Johnson was in Des Moines, IA for a medicine show. According to news reports, he he attended a dice game later that evening when an argument over money came up. Johnson got into a fight with another man at the game, and was shot to death during the altercation. Johnson reportedly was killed in an argument over two and a half dollars worth of alcohol. Three men and a woman were arrested within days and charged with his murder. Charges were reduced in the case, and newspapers reported Johnson as having been drunk and out of control, though the information was based only upon statements made by defendants. His body was returned to his Nebraska home, where he was buried with tribal honors.