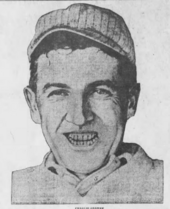 "Through his long association with the game, Graham had attained a position on the [West] Coast comparable to that enjoyed by Connie Mack in the East." - San Francisco writer Jim McGhee, discussing Charlie Graham's impact on the game in connection with the San Francisco Seals

Charlie Graham was one of the earliest major leaguers from Santa Clara University, where he attended and taught between the years 1897-1905. He taught Latin and Greek at the university before he was involved in professional baseball. In 1906, when he came to the majors with the Boston Americans, he was 28 years old. He was used heavily between April 14th and May 29th, appearing in 30 games and getting 90 at-bats. He played exclusively catcher. Charlie Armbruster ended up being the regular catcher that year for Boston, hitting .144. Graham reportedly left the majors in 1906 because of concern for his family after the 1906 earthquake. He played on the west coast thereafter.

Graham was, however, much better known for his association with the San Francisco Seals. Graham was involved with the Pacific Coast League for close to 50 years, and was a player, manager, front office executive, and part owner of the Seals. He was a co-owner of the Sacramento Senators in 1909-1913 and 1918. In 1919, Graham became one of three owners of the Seals, and by the 1930s was the sole owner of the team. In 1931, Graham built Seals Stadium to replace Recreation Park. He ran the team all way up to his death. He died in 1948 from complications due to food poisoning. He is a member of the Pacific Coast League Hall of Fame