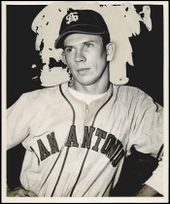 He began his professional career in 1941, playing for the Tallahassee Capitals, Moultrie Packers, Troy Dodgers/Tuskegee Airmen and Dothan Browns. Records are incomplete, but he had at least 81 hits and three home runs that season. In 1942, he hit .288 with 85 hits and no home runs in 70 games for Dothan. He did not play from 1943 to 1945.

This biographical article is missing the person's: death place
Retrieved from "https://www.baseball-reference.com/bpv/index.php?title=Charley_Grant&oldid=1098000"
Categories: