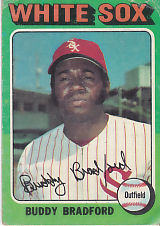 Buddy Bradford played 11 seasons in the major leagues but never received more than 281 at-bats in any one season. He was with the Chicago White Sox three times in his career, logging action with them in all but his [1971 Indians|1971]] season, split with the Cleveland Indians and Cincinnati Reds. In 96 at-bats with the Sox in 1974 he hit .333 with a .510 slugging average, and the next year batted third for the Pale Hose on Opening Day. Primarily an outfielder, Buddy played one inning of one game at third base in his career. On August 27, 1970, as a member of the Cleveland Indians against the Milwaukee Brewers, he replaced Lou Camilli. After the 8th inning he moved to left field and Rich Rollins played third for the Indians. Following his MLB days, Buddy played for the Kintetsu Buffaloes in 1977.

This article [1] indicates that although born in Mobile, AL, Bradford largely grew up in California and as a youth played baseball with Gary Matthews. During his major league days, he served in the National Guard in a unit full of athletes such as Rudy May and Clyde Wright. He had a couple injuries in 1974 and had a variety of jobs after his playing days, including as a roving instructor for the Chicago Cubs organization. He also has owned businesses, including one that he co-owned with Tommy McCraw.