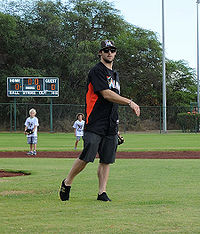 Bryan Petersen hit a key single as a pinch-hitter in his major league debut for the Florida Marlins on May 7, 2010. A day after being called up from the AAA New Orleans Pelicans, he pinch-hit for pitcher Chris Volstad against Brian Bruney of the Washington Nationals in the 8th inning with the score tied at 2. He hit a single to left that ignited a two-run rally and came to score on a single by Gaby Sanchez, giving Volstad the win.

Petersen, who grew up in the Los Angeles, CA area, had earlier starred as an outfielder for the University of California, Irvine, being named on the 2007 College World Series All-Star team. He was selected by the Marlins in the 4th round of the 2007 amateur draft. Petersen was signed by scout Tim McDonnell and made his pro debut that summer.

With the AA Jacksonville Suns in 2009, Petersen hit .297 with 7 homers and 49 RBI, while scoring 64 runs and stealing 13 bases, numbers very similar to those 2009 National League Rookie of the Year Award winner Chris Coghlan had put up a year earlier. He then hit very well in the Arizona Fall League, batting .379 in 21 games and was invited to the Marlins' spring training in 2010, starting at New Orleans before his May debut. He only got in 23 games in his first year in the majors, and almost all of them as a pinch-hitter or as a defensive replacement. He made only one start in right field, and was 2 for 24 overall, for an .083 batting average. He played 91 games at New Orleans, putting up a batting line of .255/.332/.354. He was back in the "Big Easy" for the start of the next season, but hit much better, going .351/.434/.569 in 67 games, with 21 doubles and 11 homers, before getting the call back to Florida.

Petersen had spent some time on the mound as a freshman in college, with a measure of success (a 4.32 ERA over 16 2/3 innings) and that experience came in handy on July 20, 2011 when Marlins manager Jack McKeon sent him to pitch some mop-up relief in a game the San Diego Padres were winning, 14-3. He acquitted himself well, giving up only a walk and no hits in a scoreless inning of work. It wasn't the only unusual position move in that inning, as Wes Helms played at second base for the first time after over 1000 major league games, and back-up catcher Brett Hayes played right field.