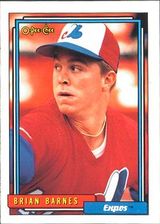 Brian Barnes was a short left-handed pitcher who was selected in the 4th round of the 1989 amateur draft by the Montreal Expos after leading the NCAA with 208 strikeouts playing for Clemson University. Possessing, a slow overhand curve, change up and sinking fastball, he raced through the Expos' minor league system in two years, reaching the bigs in September 1990 after posting a 13-7 record with a Southern League-leading 213 strikeouts and 201 innings with the Double A Jacksonville Expos. He was outstanding in four September starts, compiling an ERA of 2.89 in 28 innings with 23 strikeouts. In his last start, on September 29 (boxscore), he beat the Philadelphia Phillies with a complete game three-hitter for his first win.

The Expos were already penciling Barnes's name in their starting rotation for the 1991 season, but there were also a few skeptics who pointed out that while his statistics were outstanding, his stuff was only average and his frail body could have trouble sustaining the rigors of a full major league season. In fact, trouble came calling quickly, as he began the season on the disabled list with a pulled muscle in his shoulder and only made his debut in May, not recording a victory until July 14. As a reward for the win, he was immediately yanked from the starting rotation to make way for newly acquired Ron Darling. He returned to the starting rotation for good at the end of July, but never found the dominant form of the previous year, as the team had a record of 8-19 during his 27 starts and he walked 84 batters in 160 innings. As a result, he started 1992 with the Triple A Indianapolis Indians, making his way back to Montreal in June. He posted a solid ERA of 2.97, with only 6.93 hits allowed per 9 innings, but his lack of stamina on the mound led to a 6-6 record.

Barnes moved to the bullpen in 1993, and while his results were decent, he still had problems with bases on balls, giving up 48 in 100 innings. After the season, he was traded to the Cleveland Indians for first baseman Randy Milligan but only pitched a handful of games there and with the Los Angeles Dodgers in 1994. He kept pitching in the minor leagues for a while after, but never made it back to the majors. The bottom line was that he could fool minor league hitters, especially at lower levels, by throwing mediocre fastballs just outside the strike zone, but that did not work so well in the National League, where more disciplined hitters would lay off those pitches and draw walks, or foul them off and tire out Barnes. For one brief moment, though, he looked like a world-beater.