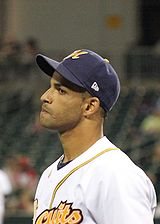 Braulio Lara pitched in the minors.

Despite his poor performance, the Miami Marlins took Lara with the last pick of the 2012 Rule 5 Draft, intrigued by a fastball that hit 98 mph. He failed to make the Marlins out of spring training and was returned to Tampa Bay. Now used as a reliever, he started 2013 poorly with the Montgomery Biscuits (0-1, 5.98, 24 BB in 43 2/3 IP).

He moved to the Korea Baseball Organization in 2016 and by 2018 was pitching in the Mexican League. In April 2019, he was killed in an accident involving multiple vehicles in his hometown of Bani, Peravia. One other person was killed in the accident, and four others were injured.