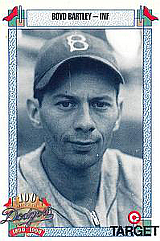 Shortstop Boyd Bartley briefly played in the majors and then was a longtime minor league manager and scout.

After starring on the diamond at the University of Illinois, Bartley was scouted by both his hometown Chicago Cubs and the Brooklyn Dodgers before signing with Brooklyn in 1943. He went straight to the Dodgers big league club and made his major league debut on May 30th, starting both games of a doubleheader against the Cincinnati Reds. Two days later, he got his only big league hit, a single off Howie Pollet of the St. Louis Cardinals. Overall, he hit just .048 in 9 games for Brooklyn and went on to appear in 34 games for the Montreal Royals that year before joining the military.

Serving in the Army during World War II, Bartley was injured in a jeep accident. He returned to baseball in 1947 with the Ponca City Dodgers, serving as a player-manager. He led the club to a Kansas-Oklahoma-Missouri League title in 1950 but missed the following summer while returning to the military. He came back in 1952 and managed in the Dodgers chain through 1956. From 1968 until the 1990s, he was a Los Angeles Dodgers scout, most notable for signing Orel Hershiser.