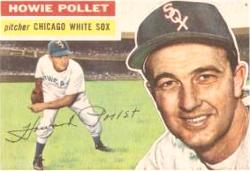 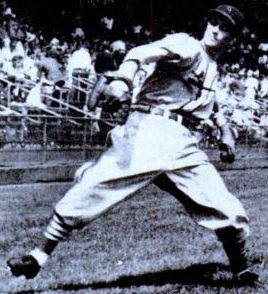 Pitcher Howie Pollet won 131 games over 14 years and was an All-Star both before and after serving in the military during World War II.

A New Orleans native, Pollet began his pro career in 1939. He won 20 games for the Houston Buffaloes of the Texas League in 1940, then repeated the feat the next year, going 20-3 with a league-leading 1.16 ERA and 151 strikeouts while also hurling a no-hitter versus Shreveport on April 25th.

He was promoted to the St. Louis Cardinals in August of 1941, posting a 1.93 ERA in 9 late-season games and breaking into the majors during the same season as another 20-year-old, Stan Musial. He went 8-4 in 1943 and was named an All-Star before entering the Air Force in July. He led the National League with a 1.75 ERA that summer; however, since he only pitched 16 games and 116 innings, he falls short of current standards for qualifying and the title is not recognized in many modern reference sources. He went in the military on a high note, having pitched 3 consecutive complete game shutouts prior to enlisting.

After the war, Pollet was discharged from the Air Force in November 1945. Back with the Cards in 1946, he led the NL with 21 wins and a 2.10 ERA, and his team won that fall's World Series. Slowed by injuries the next two years, he bounced back in 1949 and again won 20 games while leading the NL with 5 shutouts.

Pollet was dealt to the Pittsburgh Pirates during the 1951 season and dealt to the Chicago Cubs two years later. He started the 1956 campaign with the Chicago White Sox but was released in mid-season and ended his big league career with the Pirates that year.

After his playing career ended, Pollet was a St. Louis Cardinals coach from 1959 to 1964 and a member of the Houston Astros staff in 1965. Away from baseball, he worked in the insurance industry.

An obituary of Eddie Dyer says that Dyer, Pollet, and Jeff Cross were in business together in Houston, TX.