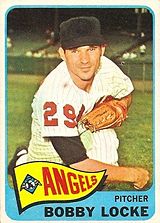 Locke was signed originally by the Cleveland Indians as an amateur free agent in 1953. He made his big league debut with them at the age of 25 on June 18, 1959 against the Boston Red Sox. He didn't do too well in his debut, going 5 2/3 innings, walking 4 and surrendering 5 hits, including 2 home runs. All told, he gave up 5 earned runs, but still managed to walk away with a no-decision. Interestingly, Locke hit the first and only home run of his career in that debut game. Although he grounded out in his first at-bat, he belted a three-run home run in his second at-bat off pitcher Frank Sullivan. The first hit he gave up was to Vic Wertz, in the 1st inning. He also gave up his first career home run to Wertz a few innings later.

In Indians, Locke completed the only two games of his career. Both of them were shutouts.

Even though 1968 was considered "The Year of the Pitcher", Locke still managed to post a 6.44 ERA in 29 games for the Angels.

Statistically speaking, Locke is most similar to John Boozer according to the similarity scores method (through July 2007). The batter that faced Locke the most in his career was Al Kaline. In 24 at-bats against Locke, Kaline hit .292.

He was a hairstylist at one point. [1] He missed the 1957 and 1958 seasons while serving with the United States Army in Germany.

Locke pitched in the game in which Ted Williams hit his 500th career home run, although Locke was not the pitcher who gave it up.

In the years in which he recorded saves, he always recorded exactly two saves. He did that five times.