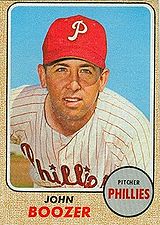 “[Boozer was] a real pen character... He would bite grasshoppers in half, stick the back half under his tongue and let them hop out of his mouth. And he would eat moths and all kinds of insects. He was always spitting tobacco on the bullpen ceiling. He’d do lovely things. Boozer had a habit of wiping the rubber off with his fingers to get it clean, and then would go to his mouth to clean his fingers.” - Dick Hall

John Boozer spent his entire career, mainly as a reliever, with the Philadelphia Phillies. He pitched in 171 games from 1962 to 1969, spending the entire 1965 season as a starting pitcher in the minors, then coming back to the majors late in the 1966 season to make two starts. His last season, 1969, was among his best, as he pitched a career-high 46 games and saved 6 games, also a career best. He died tragically of Hodgkin's disease (lymphoma) at the age of 47.