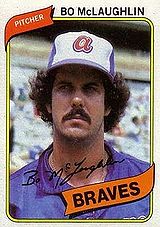 After retiring as a player, McLaughlin has worked in the farm systems of the Chicago Cubs (1993-1994), Montreal Expos (1995-1997), Baltimore Orioles (1998-2001), and Colorado Rockies (2002-present). On June 26, 2012, he was promoted to co-pitching coach of the major league team, after the resignation of Bob Apodaca. The team's pitching staff was in disarray, and only a week earlier, GM Dan O'Dowd had stated that the team would try a four-man rotation, with the starters working on a strict pitch count. After McLaughlin's appointment, O'Dowd hinted that even more radical experiments were on their way, including a possible reorganization of the pitching staff with no separation of roles between starters and relievers. That never happened as the Rockies returned to a more tradition pitching rotation the following year. Beginning in 2013, McLaughlin's title changed to Bullpen Coach/Assistant Pitching Coach, a title he also held in 2014.

Hit in the head