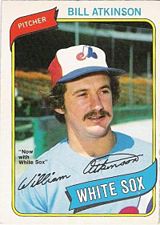 Bill Atkinson grew up in Chatham, Ontario, the hometown of Hall of Fame pitcher Ferguson Jenkins, and benefitted from tips from his famous neighbor while pitching for amateur teams in the area. He was signed by the Montreal Expos on his 17th birthday and climbed through the organization quickly, reaching AAA in 1975. He was the top reliever for the 1976 Denver Bears, who won the American Association championship, picking up 15 saves that summer.

Bill was called up to Montreal in September 1976 and did not allow a run in four outings. He made the Expos out of spring training in 1977 and had a solid rookie season, with a 7-2 record and 7 saves in 55 games. His career took a bad turn on June 29, 1978, when he hurt his groin sliding into home plate to score the winning run of the Pearson Cup exhibition game against the Toronto Blue Jays. He came back in September, after spending some more time in Denver, where he was rocked, with a 7.41 ERA in 23 games. He failed to make the team in 1979 and returned to Denver, where he was a starter, pitching 11 complete games. He was recalled in September, and pitched extremely well in a tight pennant race with the Pittsburgh Pirates. The Expos sold his contract to the Chicago White Sox after the season, but he never pitched in the majors again. He did save 11 games as a player-coach with the Glens Falls White Sox of the AA Eastern League in 1982, and combined with Mark Esser on an 11-inning no-hitter against the Reading Phillies on August 2nd that year. He retired after the 1983 season, spent as a player/coach with the Appleton Foxes.

Atkinson was extremely short for a pitcher, but compensated for his lack of a great fastball with a devastating curve, a forkball, and a change-up. He was always only as good as his control. He worked hard on his hitting (he was 3 for 10 in the majors) and his fielding: 6 putouts and 18 assists in 83 innings in 1977.