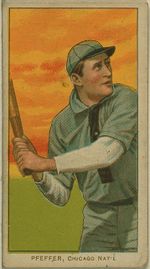 In 1911, his last season, pitching for the Boston Rustlers of the National League, Big Jeff handed Grover Cleveland Alexander his first career loss. Jeff would end the season with a 7 and 5 record, ending his career with 31 wins and 39 losses.