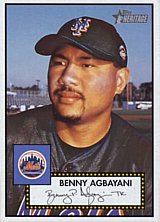 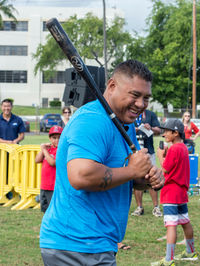 Benny Agbayani is a New York Mets folk legend, carving several signature moments into team lore despite being considered a marginal major leaguer by the powers that be. In five big league seasons, Benny had a solid .272/.362/.445 line with 39 home runs. He primarily wore number 50.

Born in Hawaii, he is the only major leaguer (as of 2020) to come out of Hawai'i Pacific University (later returning as an assistant coach). A 30th round pick of the Metsies in the 1993 amateur draft (after spurning the California Angels several years prior), Benny considered himself such a long shot that he ill-advisedly crossed the picket lines as a replacement player during 1995 scab spring training. His first brush as a folk hero came in 1996 upon reaching Triple A with the Norfolk Tides. Fans of the team became devoted to him, particularly during a 1997 season in which he hit .310/.401/.440 in 127 games. During the 1998 season, the plan was for Benny to wed his fiancee during the Triple A All-Star Game, having been named to the team. The ceremony went off successfully, but Benny was unable to play.

Why? Because he had reached the big leagues about this time, playing his first 11 games (.133/.188/.133) during that 1998 season. The Mets nearly let him get away, DFAing him off the 40-man roster in August and leaving him vulnerable to the ensuing Rule 5 draft. No takers emerged. He would be back and he would soon win the hearts of Queens fans. Coming up in May 1999 to supplant aging stars Bobby Bonilla and Rickey Henderson, Benny belted 10 home runs in his first 73 at bats, fastest to the mark in Mets history. WFAN, the Mets radio home, soon cooked up a re-worked version of Elton John's "Bennie & The Jets" called "Benny & The Mets" for the new sensation. Even after cooling off, he finished the year a .286/.363/.525 hitter with 14 homers in 276 at bats. In the postseason, he went 4 for 17 (.234) as the Mets reached the NLCS, bowing out to the Atlanta Braves.

His performance in 1999 was not enough to ensure him a roster spot in 2000, however. Not until he did something big. Benny was the first man to slug a regular season grand slam in Japan, a game-winning blast off Danny Young of the Chicago Cubs as a pinch hitter for a Mets 5-1 victory on March 30th. The rub was that Benny was carried on the roster solely for the opening series and was slated to be optioned once the Mets returned to US soil. The grand slam bought him a stay of execution that lasted the whole season and he contributed a solid .289/.391/.477 line with 15 homers in 119 games. Late in that season, Benny committed an embarrassing gaffe that seemed to endear him even more to Mets fans. He gave away a fly ball he caught after out number 2 to a fan in an August 12th game against the San Francisco Giants. It did not affect the outcome as the Mets won, 3-2. When he met the Giants again in that year's NLDS, he heroically took Aaron Fultz deep in the 13th inning of Game 3. Later, he provided the game-winning tally with a double in the only game the Mets won in the Subway Series against the New York Yankees.

The magic was gone shortly thereafter. He played one more year for the Mets in 2001, hitting .277/.364/.399 in 91 games. He was moved to the Colorado Rockies in a mammoth three-team, eleven-player swap before the next season, his last as a big leaguer. In 61 games, he was unable to do much of anything with the Rockies (.205/.266/.350) before rallying somewhat for the Boston Red Sox (.295/.395/.324 in 13 games). Reuniting with his old Mets skipper, Bobby Valentine, Benny had six strong seasons with the Chiba Lotte Marines of Nippon Pro Baseball starting in 2004. He was named MVP of the first Asia Series in 2005 after helping the Marines to the title. He retired after the 2009 season.