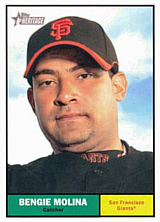 Bengie Molina is the brother of catchers Jose Molina and Yadier Molina. Bengie and Jose were teammates on the Anaheim Angels when they won the 2002 World Series. He was signed by Ray Poitevint, who had come to see his brother Jose; Bengie had been undrafted out of high school and college and was playing amateur ball.

When Molina hit one of his few triples with the Toronto Blue Jays on August 17, 2006, the whole Blue Jays dugout started laughing. Molina said he saw them out of the corner of his eye and started laughing hard as well. He had not hit a triple since 2000.

Playing for the San Francisco Giants on May 7, 2007, Molina hit a disputed two-run homer in the 5th inning against the New York Mets then drilled a three-run shot later in the inning. He was the first Giant since Willie McCovey thirty years earlier to hit two home runs in one inning.

On September 26, 2008, Molina hit a home run that was initially ruled a single, and he was immediately removed for a pinch runner, Emmanuel Burriss. Upon review, the hit was ruled a home run, but Molina had already exited the game, so Burriss finished his home run trot for him. Molina was credited with the home run and 2 RBI, but Burriss was credited with the run scored. (The BR box score and the game logs for Molina and Burriss do not correctly reflect this unique event, but their season and career statistics are listed correctly.)

On July 16, 2010, he hit for the cycle with the Texas Rangers in a game against the Boston Red Sox at Fenway Park. The triple he hit that day was only the 6th of his career - and the last one he ever hit. Even better, the triple was the last of the four hits he collected that day, in the 8th inning off Ramon Ramirez on a ball that went over CF Eric Patterson's head and then rolled to the notch in deep center, allowing the very slow-footed catcher to reach third. That memorable day also included a grand slam off Fernando Cabrera in the 5th inning.

In 2013, he was appointed assistant hitting coach with the St. Louis Cardinals, joining the team on which his brother Yadier was a star player, but only stayed with the team for one season. He spent the 2014 season as the Texas Rangers first base coach and catching instructor. He currently provides color commentary on Spanish language broadcasts for the Cardinals.