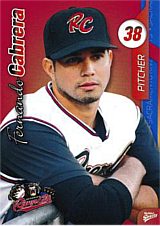 Fernando Cabrera was drafted by the Cleveland Indians in the 10th round of the 1999 drafted. He was signed by scout Henry Cruz and debuted the next summer. He was a middle reliever in parts of seven seasons, pitching a career best 51 games and 60 2/3 innings for the 2006 Tribe, striking out 71 with a bloated, yet in line with his career line, 5.24 ERA (5.19 ERA in 132 games). He was on the hill in the 2009 WBC for Puerto Rico when David Wright struck a 9th inning, game-winning single for Team USA to eliminate Puerto Rico from the competition.