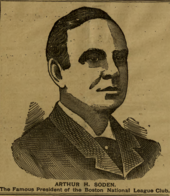 Arthur Soden was a prominent owner.

Soden had served in the US Army in the Civil War and owned a roofing business and copper mines as well as reaching into other industries. He was one of three people who helped lead the effort to save the Boston Red Stockings when the club was in danger of collapsing financially in the late 1870s. Boston would win five titles in the 1890s. Soden was interim National League president after Will Hulbert died and is often listed as the leader in formulating the reserve clause in 1879. He sold his interest in the then-Boston Braves in 1906. Soden was later criticized for coldness and financial calculation, an impression historians David Ball and David Nemec felt was too harsh a judgement.