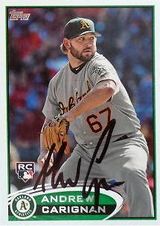 Andrew Carignan is the great grandson of Gus Dugas. He played in the 2007 College World Series for the UNC and made the All-Tournament team. He was drafted by the Oakland Athletics in the 5th round of the 2007 amateur draft, signed by scout Neil Avent and made his pro debut that summer.

In his major league debut, on September 2, 2011, he pitched a perfect 9th inning against the Seattle Mariners to finish a 9-2 A's win. He pitched to a 4.26 ERA in 6 games. Carignan was the loser in the opening game of the 2012 season at the Tokyo Dome in Japan on March 28th; he gave up a pair of runs to the Seattle Mariners in the 11th inning to be charged with Oakland's 3-1 loss. With the A's back in the USA to resume spring training three days later, he pitched a hitless 7th inning, giving up a pair of walks, after Tom Milone had tossed 6 perfect innings against the AAA Sacramento River Cats on March 31st. When the game was called because of rain, the two had combined on a 9-0 no-hit, 7-inning win. Carignan pitched in 11 games for the A's in 2012, wrapped around a trip back to Sacramento. He went 1-1, 4.66, walking 10 and striking out 8 in 9 2/3 innings before being placed on the disabled list with an elbow sprain on June 6th. He underwent Tommy John surgery on June 19th, never making it back to the bigs.