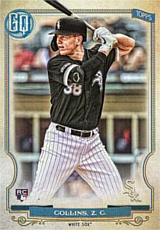 Catcher Zack Collins was selected 10th overall in 2016 by the Chicago White Sox out of the University of Miami, where he was named a Baseball America All-American at the end of his junior year, having been Baseball America Freshman of the Year in 2014. After a few games with the AZL White Sox, he was assigned to the Winston-Salem Dash of the Carolina League, where he hit .258/.418/.467 in 36 games with seven doubles and six homers, scoring 24 runs and driving in 18. In 2017, he returned to Winston-Salem. While he was only hitting .214 after 75 games, he played in the 2017 Futures Game, sharing catching duties with Chance Sisco. He also played briefly for the AA Birmingham Barons before the end of the season, ending the year at .224/.370/.445 in 113 games with 20 doubles and 19 homers. Collins spent the entirety of 2018 with Birmingham where he hit .234 in 122 games but again showed good power with 24 doubles and 15 homers. He also drew 101 walks, giving him an excellent OBP of .382.

Zack moved up to AAA with the Charlotte Knights at the start of the 2019 season. After 50 games, he was hitting .250 with 9 homers when he got the call to Chicago on June 17th, when the White Sox had to place Welington Castillo on the injured list with a strained left oblique. He made his debut on June 19th against the Chicago Cubs. Zack saw action in 27 games, batting .186/.307/.349 with 3 homers and 12 RBI. He was back with the White Sox for part of 2020 as the team's third catcher behind Yasmani Grandal and James McCann, something made necessary because one or the other was often in the line-up as the DH. He played 9 games, but went just 1 for 16. He also had one at-bat in the postseason, striking out, as part of Chicago's loss to the Oakland Athletics in the Wild Card Series.

In 2021, with McCann having left, he was now Grandal's back-up, with rookie sensation Yermin Mercedes acting as the DH and emergency third catcher. In what was only his 15th career start behind the plate on April 14th, he guided pitcher Carlos Rodon to a no-hitter against the Cleveland Indians. This was not a record, but still quite a rare feat. He ended up playing 78 games, during which he hit .210 with 4 homers and 26 RBIs. This time, he did not appear in the postseason. On April 3, 2022, just as the season was about to start, he was traded to the Toronto Blue Jays in return for a very similar player, Reese McGuire, another back-up catcher who had once been a first-round draftee.