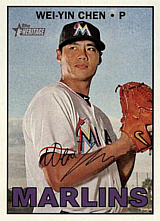 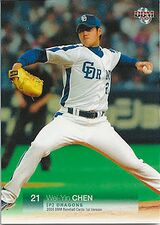 Wei-Yin Chen, also known as Wei-Ying Chen pitched nine seasons with the Chunichi Dragons of Nippon Pro Baseball before leaping to the Baltimore Orioles of MLB in 2012. A 16 game winner in 2014, he bottomed out with the Miami Marlins after joining them on a lucrative deal prior to 2016.

With a high three-quarters delivery, Chen pitches a fastball that usually sit around 90 mph and tops out at 96 mph. The best breaking ball of his package is a slider. Chen commands his fastball well against batters, but his slider is not that effective with common quality and control.

Chen initially surfaced merely as a name on the Taiwan roster for the 2002 Intercontinental Cup, not appearing. He did play in the 2003 Asian Championship and 2003 Baseball World Cup, going 1-1 with a 2.50 ERA in a team-high 5 games. He led Taiwan in innings (18), strikeouts (9) and hits allowed (19). In the 2004 Olympics, he threw two hitless innings, walking one and striking out one, in relief of Wei-Lun Pan in a 5-1 win over the Dutch national team, who had two former big leaguers in the lineup. Four years later, Chen pitched 7 shutout innings against the Dutch national team for a win in the 2008 Olympics, as Taiwan beat one of their closer rivals in recent events. He was less effective against Team Canada, giving up 4 runs in 3 1/3 innings in a no-decision as Taiwan topped Canada to clinch 5th place. Chen hurt his own cause, making a throwing error on a bunt by Emmanuel Garcia, allowing Adam Stern to score. Chen had the 4th-lowest ERA on the Taiwan staff in Beijing and got one of the two Taiwan wins.

On January 10, 2012, he signed a three-year deal with the Baltimore Orioles, with a club option for a fourth. The Orioles could afford to sign him for the long-term as he did not need to go through the posting system, thus saving the club a posting fee. He was the second major signing of a pitcher from Japan by the O's that offseason, following that of Tsuyoshi Wada in December. He made his debut with the Orioles on April 10th, starting against the New York Yankees; he gave up 4 runs (2 earned) on 7 hits in 5 2/3 innings for a no-decision. He was one of the Orioles' most reliable starters over the first half, helping the team to be surprisingly competitive in the tough AL East. On July 29th, he set a record for Taiwanese pitchers by striking out 12 batters in 5 2/3 innings in a 6-1 win over the Oakland A's; Chien-Ming Wang held the previous record with 10 strikeouts on June 17, 2007; they were also the most by an Orioles pitcher since Erik Bedard struck out 15 on July 7, 2007. The win improved Wei-Yin's record to 9-6. He finished his rookie season at 12-11, 4.02, pitching 192 2/3 innings in 32 starts. He started and won Game 2 of the ALDS against the Mew York Yankees, giving up 2 runs (1 earned) in 6 2/3 innings of a 3-2 win.

Injuries limited Chen to 23 starts in 2013, but the results were very close to those of his rookie season, as he finished with a record of 7-7, 4.07, pitching 137 innings. In 2014, he took a big step forward as he was the Birds' most effective starter. Following a win over the Seattle Mariners on August 1, his record was 12-3 with a 3.76 ERA in 21 starts. He finished the season at 16-6, 3.54 in 31 starts, logging 185 2/3 innings and 136 strikeouts against 35 walks. He was hit hard in his Game 2 start in the ALDS against the Detroit Tigers, giving up 5 runs in 3 2/3 innings, but the Orioles came back to win the game, 7-6. He pitched better in Game 3 of the ALCS against the Kansas City Royals, giving up 2 runs in 5 1/3 innings, but was charged with his team's 2-1 loss. Wins were hard to come by in the early going of the 2015 season. After 13 starts, his record was only 3-4 despite an ERA of 2.89, good for an ERA+ of 136. In his start of June 15th against the Philadelphia Phillies, he pitched 8 scoreless innings to earn a 4-0 win, his second straight win. It was a major surprise when, after the game, the Orioles sent him down to the minor leagues. The Orioles' brass explained that he had "general soreness" which begged the question why he was going to the minors and not on the disabled list; anyway, Chen denied there was anything wrong with him. The decision may have been a way to avoid him making a start against the Toronto Blue Jays, a team which had absolutely destroyed left-handed pitching that season, but if it was truly the case, it seemed a dumb way to proceed. His agent, Scott Boras, hinted that he would file a grievance. He came back to start on June 26th after one start for the Class A Frederick Keys and stayed with the Orioles the rest of the way, finishing 11-8, 3.34 in 31 starts and 191 1/3 innings. He became a free agent after the season, and while the O's were interested in retaining him, the misunderstanding in June may have played a part in his unexpected decision to accept an offer from the Miami Marlins. The deal was for five years and $80 million.

In his first season with Miami, he made 22 starts and was 5-5, 4.96 in 123 1/3 innings; not great but certainly not spectacular. The following year, on April 7, 2017, he recorded his first major league hit after starting his career 0-for-51. It was not a particularly well hit ball, as his grounder bounced four times before being fielded by shortstop Asdrubal Cabrera of the New York Mets, bu was recorded as an infield hit. He was making his first start of the year and ended up winning, 7-2, pitching 6 innings. On April 18th, facing the Seattle Mariners, he pitched the best game of his career, throwing seven hitless, scoreless innings before having to leave having reached his pitch limit. Brad Ziegler kept the no-hitter going through the 8th, but Kyle Barraclough gave up a one-out double to Mitch Haniger in the 9th for the M's only hit of the evening. Wei-Yin was given credit for the 5-0 win. Shortly thereafter, he suffered a UCL tear, somehow skirting another TJ surgery and making only 9 appearances all season. In 2018, he returned to the rotation, making 26 starts, with not good results: 6-12, 4.79 ERA but 111 strikeouts in 133 1/3 innings. With a new ownership group and diminishing returns, Wei-Yin was pulled from the rotation for [2019 Marlins|2019]] and had a miserable season, with a 6.59 ERA in 45 relief outings. With a year left on his big money deal, he was set adrift on November 25th.

The Seattle Mariners added him on a minor league deal prior to 2020, but he was released at the end of June, when it became clear there would be no minor league season and the M's were not willing to place him on their list of 60 players eligible for the upcoming season. Still, he became the highest-paid player in the major leagues that year, since the Marlins were on the hook for his full salary of $22 million, whereas all players whose annual salary was higher than his had their earnings pro-rated due to the drastically shortened season. Had they known what was about to happen, the Marlins would have saved $14 million by simply waiting for spring training to give him his walking papers, but hindsight is always 20-20. Just a little ways behind him was another inactive player, the perennially injured Jacoby Ellsbury, owed $21.1 million, but in this case the New York Yankees were seeking relief, arguing that his injuries were the result a violation of his contract. After not playing at all in 2020, he signed with the Hanshin Tigers of Nippon Pro Baseball for 2021.