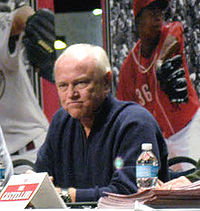 Walt Jocketty was the farm director of the Oakland A's from 1981 to 1993, being promoted to Director of baseball operations after five years. He spent 1994 as the assistant GM of the Colorado Rockies and became General Manager of the St. Louis Cardinals in October 1994. Under his leadership, the Cardinals won the 2004 National League pennant and the 2006 World Series. He submitted his resignation after the 2007 season and joined the Cincinnati Reds front office in early 2008 as an adviser to new owner Bob Castellini. In April of that year, he replaced Wayne Krivsky as the Reds GM. He was in the position until the end of the 2015 season, when he gave up to job but remained the team's President of baseball operations for one more season. After the 2016 season, he relinquished that title to Williams as well and was named a special adviser to Castellini.

This page is in need of some additional content. Please help the Bullpen by expanding it, or learn how to contribute.
Retrieved from "https://www.baseball-reference.com/bpv/index.php?title=Walt_Jocketty&oldid=941654"
Categories: