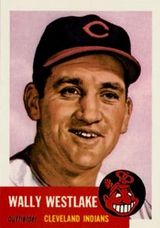 Wally Westlake had a 10-year career in the majors, primarily as an outfielder, and became a big hit with Bucco fans - averaging slightly over 20 homers his first five years, along with a .280 batting average.

Westlake debuted in the minors in 1940. Reaching the Pacific Coast League in 1942, he then missed three years due to military service. He spent another year in the PCL in 1946 before moving to the majors in 1947. He hit two walk-off homers as a rookie, something no Pirates rookie would duplicate until Jack Suwinski 75 years later.

His best year was in 1949 for the Pittsburgh Pirates, when he had 23 home runs and 104 RBI, distantly behind Ralph Kiner's 54 home runs. He was second on the Pirates again in 1950, when he hit 24 home runs. In 1951 he made the All Star team. He had hit 16 home runs in only 50 games when he was traded in June to the St. Louis Cardinals. Although he played in 73 more games with them, he hit only 6 more home runs, although he added 5 triples for them.

Lifetime, he had 127 home runs and a .272 batting average. According to the similarity scores method, the most similar recent player to Westlake is Jeffrey Hammonds.

When he died in 2019 at the age of 98, he was the second-oldest living former major leaguer. He was the brother of Jim Westlake.