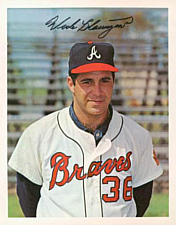 Blasingame: 'That sure was a helluva performance by you yesterday, Billingham. Three walks in a row. You were so tight you couldn't drive a pin up your ass.'"

Billingham: 'I haven't seen you do anything lately, Blasingame. What's your record?'

Blasingame: 'I've won some big games in the big leagues, sonny. How many have you won in the bigs?'

Billingham: 'We can't be talking about ancient history. What have you done this year? Go ahead. Tell me.'

Billingham: 'Okay, so you're no one to talk.'

Gladding: 'Well, maybe not. But he was right about those three walks, Billingham. That was a disgrace.'

Billingham: 'Oh sure. Listen to you, with your 5.6 earned run average. Some relief pitcher you are.' - from Jim Bouton's Ball Four

Wade Blasingame was signed by the Milwaukee Braves as an amateur free agent in 1961. He finished 9th in the National League in winning percentage in 1964, going 9-5 with a 4.24 ERA in his rookie season. He won 16 games at age 21 the following year, leading some to dub him "The New Spahn" in the Braves' last year in Milwaukee. But he had a very poor strikeout-to-walk ratio - 117 strikeouts against 116 walks - and that, coupled with injuries, saw to it that he never repeated that season. He pitched another seven years in the majors, coming closest to matching his 38 appearances that magical year with 30 (28 starts) in 1971, finishing with a less magical 9-11, 4.60 record as a Houston Astro.