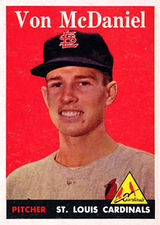 "He lost his coordination and his mechanics. There was no real explanation. Some people thought it was psychological. But who knew about those things then? . . . It depressed him for years after he left baseball." - Von's brother Lindy McDaniel, describing Von's troubles in a 2001 article in the New York Times about Rick Ankiel

The younger brother of Lindy McDaniel, Von McDaniel made his debut with a splash in 1957 at age 18. With a blazing fastball and incredible potential, great things were expected of him. Unfortunately, beset with chronic arm problems he soon disappeared from the majors after his fine rookie season. Von switched to playing the field in 1959 while also performing often as a pitcher, but after that he would appear on the mound just occasionally. He made it back to Triple A in 1963-1964 and finished his pro career in the Texas League in 1966.

Another brother, Kerry Don McDaniel, pitched in the minors for the St. Louis Cardinals.