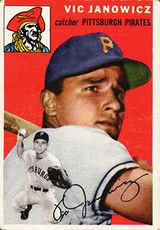 Vic Janowicz won the 1950 Heisman Trophy as the outstanding college football player in the United States and is a member of the College Football Hall of Fame. After college, he played with the Pittsburgh Pirates (despite not playing baseball in college) and the NFL's Washington Redskins. His professional athletic career was cut short by injuries suffered in a 1956 car accident.

The obituary of Janowicz in the New York Times indicates that he was a National Honor Society scholar in high school as well as being a big star in football, baseball and basketball. Although a couple of baseball teams wanted to sign him, he went to Ohio State University to play football. After winning the Heisman Trophy, he served in the Army and then signed with the Pirates. He was released by the Pirates after playing a couple of seasons with them - mostly at catcher and third base - and then started his professional football career.

After his playing days he broadcast Buckeye football games, worked for a manufacturing firm, and was on the staff of the Ohio state auditor.