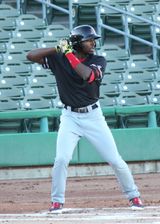 Infielder Travis Demeritte was selected by the Texas Rangers and scout Derrick Tucker in the supplemental first round of the 2013 amateur draft, with the 30th overall pick. Although he had committed to the University of South Carolina, he soon signed for a $1.9 million bonus. He joined the AZL Rangers and made his pro debut on June 20th, going 1-for-4 with a home run and 3 RBIs against the AZL Royals. he hit .285 in 39 games that first season. In 2014, he was the regular second baseman for the Hickory Crawdads of the South Atlantic League, playing 118 games and hitting .211 and striking out 171 times. He did slug 16 doubles and 25 homers and scored 77 runs while being young for the league, so there was still a lot of positive about that season.

In 2015, an injury limited Travis to 53 games, including a rehabilitation assignment with the Spokane Indians of the Northwest League. the bulk of his playing time was back with Hickory, where he hit .241 with 5 homers and 19 RBIs in 48 games. He then spent the winter with the Adelaide Bite of the Australian Baseball League, but hit only .216 in 47 games. He showed marked improvement in 2016, however, as after 88 games with the High Desert Mavericks, he was hitting .272/.352/.583. he was selected to play for the United States team in the 2016 Futures Game. His power was back after a one-year hiatus, resulting in 20 doubles and 25 homers. On July 27th, he was acquired by the Atlanta Braves in return for two major league pitchers, Lucas Harrell and Dario Alvarez, whom the Braves had basically picked up off the scrap heap only weeks earlier. The deal had passed a bit under the radar, but analysts were quick to point out that it was quite a coup for the Braves to pick up a top prospect in such a manner.

On July 31, 2019 he was traded by the Braves to the Detroit Tigers along with P Joey Wentz to obtain All-Star closer Shane Greene. He was immediately brought up to the majors and made his debut on August 2nd, going 1 for 2 with a triple, 2 walks, a run scored and a stolen base in a 5-4 loss to his former team, the Rangers.