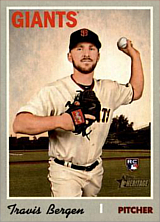 Left-handed pitcher Travis Bergen was a 7th-round selection by the Toronto Blue Jays in the 2015 amateur draft, out of Kennesaw State University. He began his professional career that year with the Vancouver Canadians of the Northwest League where he was the winning pitcher in both of his outings, not allowing a run in 5 1/3 innings. He again did not give up any runs in 2016, but still in limited usage, as he pitched 2 games for Vancouver and 3 for the GCL Blue Jays before having to undergo Tommy John surgery. Rehabbing from the operation in 2017, he again saw only limited work, a total of 18 1/3 innings spread between the same two low-level teams. He was finally healthy in 2018 and able to spend a full season pitching out of the bullpen, making 43 appearances between the Class A Dunedin Blue Jays and Double A New Hampshire Fisher Cats. The results were good, with a record of 4-2, 0.95 with 8 saves and 74 strikeouts in 56 2/3 innings. The Blue Jays decided not to promote him to their 40-man roster after the 2018 season, probably banking on the fact that his limited professional experience would make him less desirable to other major league teams looking for pitching via the 2018 Rule V Draft.

Naturally, on December 13th, he was picked by the San Francisco Giants, joining teammate Jason Romano, who was selected a few picks earlier. This exposed the Jays to some criticism, given they had kept a roster spot open and used it to take a flyer on an 18-year-old who had never pitched above Rookie ball in Elvis Luciano, but GM Ross Atkins said that while he regretted losing the two older pitchers, Luciano was in his eyes a special talent worth the risk. In any case, both Bergen and Luciano made their respective team's Opening Day roster, with Bergen making his debut in the Giants' second game of the season, on March 29, 2019, by retiring the only batter he faced - Ian Kinsler - to close the bottom of the 6th inning against the San Diego Padres. In 21 games, he crafted a 5.49 ERA, 1.38 WHIP and 9 walks against 18 strikeouts in 19 2/3 innings. In August, he was designated for assignment and returned to the Blue Jays, for whom he made three Triple A appearances with the Buffalo Bisons.

In 2020, he was not on the Jays' 40-man roster but was still added to their pool of 60 players, working out at the team's alternate training site. On August 24th, he was selected to be added to the roster, with Thomas Pannone being designated for assignment to make room, and he then made one appearance for them on August 25th, pitching 1 2/3 scoreless innings against the Boston Red Sox. He was optioned back to the training squad the next day, then on August 31st was traded to the Arizona Diamondbacks in return for veteran starter Robbie Ray.