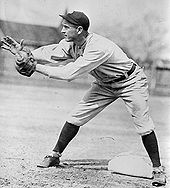 Emory "Topper" Rigney played shortstop for six years in the major leagues. He drew walks well, hit triples, stole some bases, and hit lots of sacrifice hits. The similarity scores method comes up with a surprise comparision as the most similar player to Rigney - David Eckstein, a recent player. Eckstein, however, didn't draw nearly as many walks.

Thorne Smith's popular novel "Topper" came out in 1926, during Rigney's career, so it would be logical to suppose Rigney was given his nickname from the popular book, which later was made into a movie and television series. However, the SABR biography indicates that he had received that nickname by 1920, years before the book came out.

He was at Texas A&M University at the same time as Rip Collins.