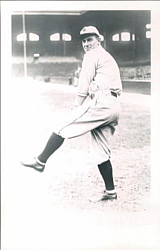 "I should have been an outfielder. All they have to do is go out there and look around, catch a ball, maybe, come in to hit and then walk out again. Who gets all the money in baseball? The outfielders. When a pitcher signs a new contract, the owner says, 'Well, you lost ten games last year, so we're going to cut your salary a thousand.' The pitcher says, 'I wouldn't have lost those games if the outfielders had been on the job.' The owner replies, 'That's too bad' – and cuts your salary. The outfielder increases his average a couple of points and the owner says, 'You've had a great year. I'm going to give you a thousand raise.' And you think outfielders are not smart, eh?" - Rip Collins, to The Sporting News, 1968

Rip Collins was a reliable workhorse in the 1920s, exceeding at least 100 innings in 10 of his 11 seasons. An 108-game winner, Rip reached 14 victories three times, including as a rookie with the New York Yankees in 1920. After beating Ty Cobb and the Detroit Tigers four times for the Boston Red Sox in 1922, Frank Navin finagled a deal to satisfy his star and bring Rip aboard. He did much of his big league dealing in the Motor City, suffering from a lack of run support over the next five seasons. He finished his career with three seasons for the habitually miserable St. Louis Browns.

Following his career, he entered the world of law enforcement, passing away from a stroke in 1968.