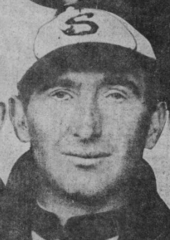 "Tenney has secured a young New England Leaguer, Tom Madden, of the Haverhill team, to fill in during the remaining championship games. Madden is a very fast fielder and base runner, and a good batsman, and is considered to be a most promis­ing ball player." - Sporting Life, September 22, 1906

He is not to be confused with a contemporary, Thomas F. "Bunny" Madden.