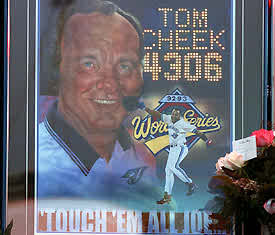 Tom Cheek was an announcer for the Montreal Expos from 1974 to 1976, working as a back-up to Dave Van Horne. He then was the main radio voice for the Toronto Blue Jays from their debut in 1977 until he was diagnosed with brain cancer in 2004. He was behind the microphone for every Jays game during that period, both regular season and postseason, until he took a day off on June 3rd due to his father's death. His streak ran to 4,306 consecutive games in the regular season and 41 more post-season contests. Immediately after his return to the booth, he complained of fatigue and loss of energy and was diagnosed with a brain tumor. An operation performed on June 13th failed to remove the tumor.

Although he planned to work the 2005 season, Cheek was unable to regain his health. He died of brain cancer on October 9, 2005.

Tom was awarded the Jack Graney Award (a "Lifetime Media Achievement Award") by the Canadian Baseball Hall of Fame in 2001. A finalist for the Ford Frick Award in his final year of life, Cheek's most famous call was in the 1993 World Series - when Joe Carter hit the Series-winning homer, Cheek said "Touch 'em all, Joe. You'll never hit a bigger home run in your life." He did win the Frick Award on a posthumous basis in 2013. His wife Shirley accepted the award on his behalf. He also was inducted in the Canadian Baseball Hall of Fame that year, alongside two players whose career he had announced, George Bell and Rob Ducey, in addition to Tim Raines and Nat Bailey.

Source: Obituary by the Associated Press