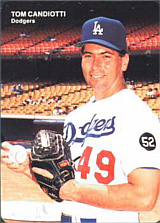 "Trying to hit his knuckler is like trying to swat a fly - you always seem to miss it. You see it coming and you wait and wait and wait. Then you swing and you're out in front of it." - Jody Reed

Knuckleballer Tom Candiotti won 151 games over 16 seasons in the majors.

Tom began his pro career with the unaffiliated Victoria Mussels of the Northwest League in 1979, going 5-1 with a 2.44 ERA before being signed by the Kansas City Royals prior to the 1980 season. After one year in the Royals system, he was selected by the Milwaukee Brewers in the minor league portion of the 1980 Rule V draft. He suffered an elbow injury that year and underwent a still relatively new procedure performer by Dr. Frank Jobe: Tommy John surgery. He missed the entire 1982 campaign but came back in 1983 and reached the big leagues, becoming the second player after the surgery's namesake, Tommy John, to pitch in the majors after the operation. In 10 games for the Brewers that year, he went 4-4 with a 3.23 ERA.

Candiotti struggled for Milwaukee in 1984, going 2-2 with a 5.29 ERA in 8 games, and spent the entire next season in the minors, transitioning from a conventional pitcher to a knuckleballer. He became a free agent and signed with the Cleveland Indians for 1986. Alongside fellow knuckleballer Phil Niekro, he won 16 games and led the American League with 17 complete games. Relying mostly on his knuckler, he also threw a curveball and a "credible" fastball to keep hitters off balance, and he went on to win at least ten games seven more times. In a 1991 season split between Cleveland and the Toronto Blue Jays, Tom was in line to be the season's ERA king so long as his last few starts did not go awry. Naturally, it got away from him on September 23rd against the California Angels, when he was pounded for 7 runs in two-thirds of an inning. Still, he finished the year with a 2.65 mark, his best in a single season, and even more remarkable considering he changed teams midway and needed a new set of catchers to learn his knuckleball. Tom then moved to the Los Angeles Dodgers via free agency that off-season, and pitched in the majors until 1999, when he was nearly 42 years old.

Tom, the brother-in-law of Brad Wellman, became the second celebrity bowler of the International Bowling Museum & Hall of Fame in 2007, following Jerome Bettis. He averaged over 200 in leagues in Scottsdale, Arizona. Tom worked on ESPN's Baseball Tonight from 2002 to 2005 and appeared in the 2001 Billy Crystal film, 61*, as another knuckleballer, Hoyt Wilhelm.