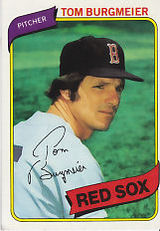 “Burgmeier showed me a fine arm... He throws hard, has a very fine curveball, and is always ready to pitch. I predict he’ll do an excellent job for [Angels manager] Bill Rigney, but I only hope he doesn’t do well against the Twins.” - Jim Rantz, Minnesota minor league employee, to the St. Cloud Times, May 16, 1968

He was a very good athlete and early in his career, he was used a few times as a pinch-runner and as an emergency substitute in the outfield.