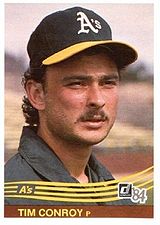 Tim Conroy was a standout high school pitcher at Gateway High School in Monroeville, PA. Selected by the Oakland A's in the first round of the 1978 amateur draft, 20th overall, Tim went directly to the major leagues in a publicity stunt courtesy of Charlie Finley, along with fellow first rounder Mike Morgan, in an effort to drum up some measure of support for his miserable big league club. Although both careers were impacted negatively by the move, Morgan rebounded to have a long major league career. Conroy was less successful, returning to the major leagues from 1982 to 1987 and went 18-32 with a 4.69 ERA. Still, the stunt made him the first player born in the 1960s to appear in a major league game, when he made his debut on June 23, 1978. He made 2 starts for the A's, with no decisions and an ERA of 7.71 in 4 2/3 innings, then was sent to the minors, not returning to the big leagues until the end of the 1982 season.

After spending time in the majors with both the A's and St. Louis Cardinals, Tim finished his career in the minors for the Pittsburgh Pirates.

Conroy was a coach for the Butte Copper Kings in 1993 and High Desert Mavericks in 1994. He was then a scouting supervisor and cross checker for the Cardinals and Atlanta Braves. In 2011, Conroy was a Special Assistant to the GM for the Braves. He moved to the same position with the Kansas City Royals in 2013 and continues to hold that position.