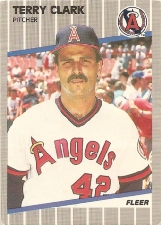 His son, Matt, reached the major leagues in 2014. His daughter-in-law, Julia Morales, is a sideline reporter for the Houston Astros.