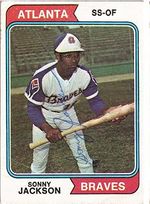 Sonny Jackson had a twelve-year career in the major leagues, coming up originally at age 18. Although his major league debut was in 1963, he still qualified as a rookie in 1966 when he hit .292, led the National League in singles and sacrifice hits, and broke the modern league record for stolen bases by a rookie. He was a distant second in the Rookie of Year voting behind Tommy Helms.

In 1963 at age 18, he was one of many young phenoms on the Houston Colt .45's team, including 19-year-old Joe Morgan, 19-year-old Rusty Staub, 20-year-old Jerry Grote, 21-year-old Jimmy Wynn and several less famous youngsters.

After 1966, though, he was never a strong hitter even by standards of the second deadball era, and that, combined with injuries, eventually ended his career.

He was a shortstop, but was converted to the regular center fielder for the Atlanta Braves in 1971, and thereafter played both outfield and shortstop. All told, his professional playing career lasted from 1963 to 1976.

He has been a major league coach for 12 seasons with the Braves (where he worked for 19 years total), the Giants, and the Chicago Cubs.

Sonny was most recently a special assistant to Cubs manager Dusty Baker. He played with Baker from 1969-1974 on the Atlanta Braves.