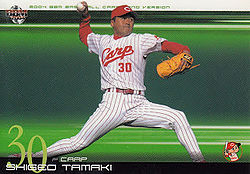 A third-generation Japanese-Brazilian, Shigeo Tamaki was a reliever for a decade in Nippon Pro Baseball.

He pitched for Mitsubishi Motors and Kawasaki in the Japanese industrial leagues. He was the top pitcher for the Brazilian national team in the 1995 Intercontinental Cup, allowing five hits and four runs (one earned) in ten innings. He was then picked in the fifth round of the 1995 NPB draft by the Hiroshima Carp. He debuted with Hiroshima in 1996, going 3-1 with one save and a 4.11 ERA in 30 appearances.

Tamaki signed with the expansion Rakuten Golden Eagles and had a 2-0, 3.52 record for the 2005 team; on a bad expansion outfit, he had the best margin of wins over losses. He did not pitch for them in 2006 and retired at the end of the season. Rakuten then hired him as a coach and scout.