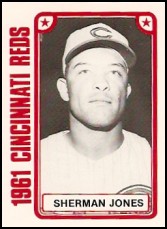 He made his big league debut with the San Francisco Giants in 1960. He was traded to the Cincinnati Reds the following year, 1961, and pitched two thirds of an inning for the club in that year's World Series. Jones was then taken by the New York Mets in the expansion draft and finished his major league career about a month into the 1962 season.

He was a big man who was called "Roadblock Jones". He had served in the Army and often had arm troubles as a pitcher.

Following his baseball career, Jones settled in Kansas City, Kansas, where he became a police officer. Sherman coached semi-pro baseball teams in Kansas City. He was an excellent coach, providing tips, training and humorous stories of the majors. He was well liked by all who played for him.