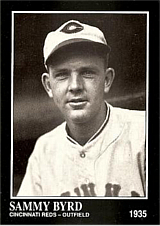 "Sammy Byrd, the Yankee reserve outfielder, is a good golfer, but he has not had a real chance to show how good a ball player he is." - Boston Globe, December 17, 1934 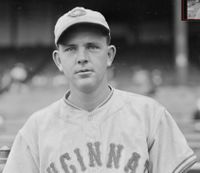 Sammy Byrd earned the nicknames "Babe Ruth's Legs" and "Babe Ruth's Caddy" as he often replaced The Babe as a pinch runner late in the slugger's career. He later became a professional golfer who won 23 pro events.

Byrd was a backup outfielder who appeared in 645 games defensively, roughly equal amounts in left field, center field, and right field. Offensively, he received 1,700 at-bats, with his best year being his rookie year, when he hit .312/.409/.471 as a Yankee part-timer in 1929. He appeared very briefly in the 1932 World Series, entering the deciding Game 4 in the 9th inning as a defensive replacement for, you guessed it... Earle Combs! (It was actually Babe Ruth, of course).