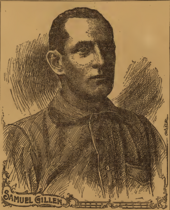 Sam Gillen, born in Pittsburgh, PA, played for both the Pittsburgh Pirates in 1893 and the Philadelphia Phillies in 1897. By far the most of his appearances were in 1897, when he is listed as the regular shortstop for the Phillies.

Gillen died young at age 37. He is not to be confused with Tom Gillen, another 19th Century player who died even younger. Tom was from Philadelphia, PA.