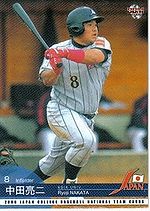 Nakata hit 44 home runs in high school. He was picked to the Tokyo Metropolitan University League Best Nine four times in college. He was 2 for 17 with two doubles, two walks and a steal as Japan's first baseman in the 2007 World Port Tournament. The hefty batter was a favorite with the fans, though, taking home the World Port Tournament Most Popular Player. In the 2008 Haarlem Baseball Week, he was more productive, 9 for 25 with a double, homer, walk, steal and 8 RBI in 7 games. The homer was timely, coming with a 2-1 deficit in the 9th against the Dutch national team's David Bergman as Japan rallied to beat the hosts. He won the Carl Angelo Award. He tied for third in the event in average, was fourth in slugging (behind Randolph Kirindongo, Alfredo Despaigne and Ryan Jackson), tied for the home run lead, tied for 5th in runs, led in RBI (3 more than anyone else), tied for the hit lead and led in total bases.

In the 2008 World University Championship, he hit cleanup for Japan. He was 1 for 4 in the 1-0 Gold Medal game loss to Mike Minor and Team USA. He played error-free ball at 1B in the tournament and hit .281/.410/.375 in 8 games. He tied for third in the event in runs (9, behind Keijiro Matsumoto and Micah Gibbs), tied for 6th in hits (9), was second in walks (7, one behind Blake Smith) and tied for 7th in steals (2). Despite being a cleanup man, he did not homer. And despite weighing over 250 pounds, he had more swipes than home runs.

Nakata was taken in the third round of the 2009 draft by the Chunichi Dragons. He debuted as a pinch-hitter for Hitoki Iwase on July 20, 2010 and was retired. The next day, he singled off Yataro Sakamoto for his first hit. He was retired in his other seven at-bats that season, all as a pinch-hitter. In the the Central League playoffs, though, he drew a walk in game four to set up a run and help Chunichi win a spot in the 2010 Japan Series. He saw more frequent action in the Series itself, going 1 for 6 with a double and three strikeouts as the Dragons fell to the Chiba Lotte Marines. He started 2011 6 for 24 in a backup role.