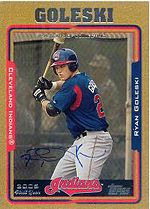 Ryan Goleski was the first pick in the 2006 Rule V Draft, but it later was revealed that his old team knew he was having wrist surgery and did not reveal this fact to the public, creating a controversy.

Ryan debuted with the Mahoning Valley Scrappers, hitting .296/.358/.473 and finishing 10th in the New York-Penn League in average; he tied Kevin Kouzmanoff for the team lead with 8 home runs. In 2004, Goleski starred for the Lake County Captains, producing at a .297/.372/.527 line with 28 home runs and 104 RBI. His 10 sacrifice flies led the South Atlantic League. He tied Adam Boeve for third in the SALLY in home runs and tied Jon Benick for second in RBI, two behind leader Delmon Young.

The Tampa Bay Devil Rays made him the first pick in the 2006 Rule V Draft, then sold him to the Oakland Athletics. It was projected by many that he would have the top crack at Jay Payton's old starting spot. Shortly after the draft, though, it was revealed that on November 9 Goleski had surgery to remove bone chips in his wrist. Cleveland had not made this information available at the time of the draft. Goleski stayed with Oakland during spring training but was returned to Cleveland prior to the 2007 season.