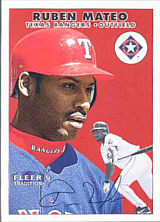 "When people ask me who the best prospect I ever had who just didn’t pan out, Ruben is the guy that I think of. He had a Dave Parker-throwing arm. He could run. He had Juan Gonzalez-type power. And he could play center field." - Doug Melvin, former Rangers general manager

He made his major league debut with the Rangers in June 1999 and had 121 at-bats at the major league level that year, slugging .451. At age 21, he was by far the youngest player on a Rangers team whose average age was over 30. Teammates included Rafael Palmeiro, Juan Gonzalez and Ivan Rodriguez. In 1999, Baseball America described Mateo by saying: "For pure tools and athletic ability, Mateo is one of the game's premium prospects".

Ruben came back in 2000, still as the youngest player on the team, and had over 200 at-bats, hitting .291. In early June, he suffered a broken femur trying to beat out a grounder and missed the rest of the season. He had been one of the most touted prospects in the Rangers organization at the time, but he failed to live up to his billing in future years.

During a 2001 season when he hit .248 and spent half the season in the minors, he was traded to the Cincinnati Reds. He came up with the Reds in both 2002 and 2003, but also spent time in the minors during both seasons, hitting over .300 both years with some power with the Louisville Bats. In the majors in 2003, he had 207 at-bats, his highest total at the level. The year 2004 was split between the Pittsburgh Pirates and the Kansas City Royals, as well as 35 games with the Nashville Sounds where he slugged .711.

In 2005 he played in Korea. After that, he played winter ball in the Dominican League, independent ball, minor league ball with the Huntsville Stars and in the Mexican League.